In 2020, an effort that started in the spring of 2019 on the mapping of the socio-cultural elements that comprise the mandra system of Lemnos was completed. The mandra system is a set of sustainable, traditional practices of the primary sector of the island. The report studies their role in the past and the dynamics that accompany their implementation today and tomorrow in Lemnos. Central role to the mandra system plays the kehaghias, the farmer-stock breeder of Lemnos, who developed a set of practices in order to be able to cope with the difficult production conditions in the past and to be self-sufficient. This set of practices allowed him to survive and today he is called to implement them in the context of sustainable development, necessary for the future prosperity of the primary sector.

The report, which drew data from bibliographic sources but also from field research, includes information on the history and mythology of the island, economic and demographic data, the structure and types of mandra, historical and modern cultivations, customs and traditions related to the primary sector including the misiako or timisaro system, as well as information on the household economy, the traditional products of Lemnos in the context of self-sufficiency, myths and legends, traditional professions and the role of the mandra as a vehicle for sustainable development in the 21st century. The report is complemented by an interesting glossary with terms related to the primary sector of the island.

A group of MedINA associates contributed to the writing and editing of the report (Stefanos Dodouras, Irini Lyratzaki, George Dimitropoulos, Lily Mordechai) while special thanks are due to Rafael Giannelis who acted as the study consultant and Marina Dimopoulou for her drawings. The report is available in Greek and English. 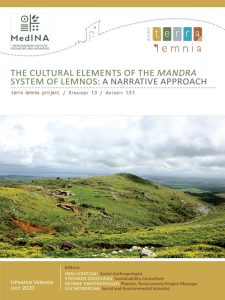